Grace and the Flag tells the story of Grace Wisher, a real-life 13-year-old African American indentured servant in the early 1800s who made a little-known, but significant contribution to American history during a time of rampant discrimination and injustice. Indeed, Grace made a very significant contribution to the creation of the American flag—the very flag that inspired the American National Anthem. Especially during these modern times of social upheaval, when women’s rights, racial injustice, and equality of all people are challenged by events happening in the United States, it is important to acknowledge the contributions of people like Grace Wisher to give her voice, and inspire every little girl and every child—especially minority children—of their potential to make a positive impact on one of the greatest nations on Earth. After all, as the Dalai Lama once said, “if you think you’re too small to make a difference, try sleeping with a mosquito in the room.” 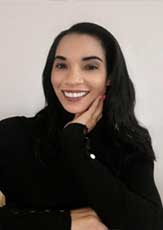 Lauren Lundin is an international guidance counselor, wife, and mother of three little girls. She was born in Thailand, raised in India, and has lived in many different countries. Her graduate studies at Columbia University in New York focused on cross-cultural awareness, microaggressions, and multicultural understanding.

As a mixed-race woman (African American and Caucasian), she is particularly interested in race-related history and the evolution of minority groups. She values the opportunity to encourage and support the learning of all children. Lauren is also the author of another top-rated children’s book called My Toothbrush Ran Away, which teaches kids about the importance of good dental hygiene.